Misery Will Find You at Rams Head Live 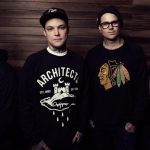 The Amity Affliction and Senses Fail bring their Misery Will Find You Tour, with Silent Planet and Belmont, to Rams Head Live (20 Market Pl. Baltimore) this Friday Jan 18. Doors open at 6:30 p.m. and the show starts at 7:15 p.m. The Brisbane post-hardcore act Amity Affliction were formed in 2002 by a bunch of longtime pals, still high schoolers at the time, who had been affected by the death of their teenage friend in a road accident. The band, initially a quartet, released a demo in 2003 and an EP in 2004, but did not start making waves in earnest until sometime later. In 2005, after the screamer... Read More