Can You Really Become Addicted To Videogames

Know anyone who plays those games?

Know people who say, or demonstrate by their actions, that they’re “addicted” to those games?

It sounds like a sci-fi scenario, but from a logical standpoint, you could become addicted to video games. Much like anything else addicting, all it would require would be repetitive stimulation of the right portions of the brain, creating a psychological and physiological need.

And given the practice of playing video games, that’s not so far-fetched.

All video games are a sequence of pre-programmed reactions to your actions.

Your actions are accompanied by a series of synapses firing in your brain, creating connections between your actions, your emotions, the chemicals released into your cerebral cortex, and the visual stimuli before you that is leading to your reactions.

Ergo, as you embark upon playing a video game, you are being programmed. Your brain is firing in a certain pattern the same way the game’s computer chips are firing against that pattern in an attempt to elude you and beat you.

But in the meantime, certain areas of your brain are being consistently stimulated. Over. And over.

So, say a computer company wanted to get you hooked on a video game.

It would look at research into the pleasure and addictive centers of the brain, and create a game that stimulates those areas on a consistent enough basis that you finally go beyond the breaking point and develop an “addiction” to that game.

But … what if the scientific proof of the potency of that addiction was also able to be manipulated for other means?

What if the video-game companies began selling “ad space” — placing subliminal messages in games at points past that threshold of addiction and suggestibility? Since your brain would be more open to that suggestion and addiction, it would be easier for, say, fast-food companies or soda manufacturers to get compliant gamers hooked on their products without them even realizing it. Their conscious minds would be so occupied with the games that their subconscious would be defenseless, and thereby more easily programmed.

So, for example, after an hour or two of playing “ 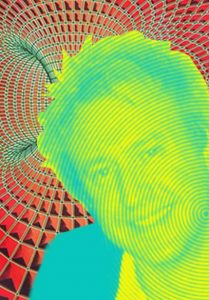 Overwatch,” suddenly, inexplicably, you would develop an intense craving for Taco Bell or Mountain Dew. Which would seem really odd. Especially if you were a vegetarian on a strict macrobiotic diet.

And if you can program people to buy more fast food or energy drinks or shoes or video games or whatever, what if you could program them to participate in other, more provocative behaviors?

What if, after a certain number of hours of attempting to master a game, a player would reach a threshold of stimulation that would realign his cerebral chemistry to get him to think a certain way, support a certain position, or generally be more fearful or suspicious or insecure? Which could, in turn, open him up to more suggestions to purchase certain products that addressed those nascent needs?

Of course, the programming wouldn’t have much of an effect on the casual gamer. However, the person who spends hours and hours or entire days in front of a gaming screen would find himself an unwitting vessel.

That could be the least of his concerns.

Now if you’ll excuse me, I need to finish my burrito loco, Red Bull and this game of Fortnite.

Sean Leary is an author, director, artist, musician, producer and entrepreneur who has been writing professionally since debuting at age 11 in the pages of the Comics Buyers Guide. An honors graduate of the University of Southern California masters program, he has written over 50 books including the best-sellers The Arimathean, Every Number is Lucky to Someone and We Are All Characters.
Tagged: FortniteGod of WarOverwatchSean Learyvideogames