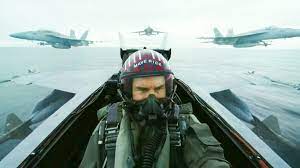 The first time I saw Top Gun, I hated it. As a wee lad, I remember seeing it in a packed theater in 1986. I remember the whooshing of the jets, the omnipresent soundtrack, and the unnerving intensity of Tom Cruise. I remember the buzz of the audience walking out. People adored it, and I remember looking around and thinking, “What movie did you guys just see because that sucked.”

Is it still that bad, though?* Of course not, and it’s yet another example where the movie isn’t the problem; I’m the problem. I should like it. Consider that, despite what you might think of his personal life, Tom Cruise is a genuinely skilled actor and I like his work far more often than not. The late Tony Scott made a number of excellent films. Crimson Tide might be his best work, and it’s a near-perfect thriller that has quite a lot to say about duty, professionalism, and machismo. Hell, there are more than a few films about the military that are beloved by me.**

In January of 2016, it was announced that a sequel, Top Gun: Maverick, would enter production. The film was scheduled for release on (deep breath) July 12, 2019, then June 26, 2020, then December 23, 2020, then July 2, 2021, then November 19, 2021, then May 27, 2022. Trust me when I tell you I was not enthusiastic about this sequel. Despite Cruise’s usually strong track record, I figured the film would be more pointless nostalgia. As a result, it was with no small amount of trepidation I sat down to watch it. I’m pleased and more than a little stunned to report that…well, I genuinely liked it!

Decades have passed since the events of Top Gun. Tom “Iceman” Kazansky (Val Kilmer) has turned his focus from flight to leadership in the U.S. Navy. He’s an Admiral who wields more than a little power, and that’s fantastic news for Pete “Maverick” Mitchell (Tom Cruise). You see, while Iceman has ascended to the heights of the top brass, Maverick…hasn’t. 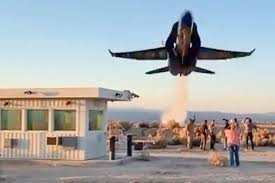 Maverick is still a Captain, still very, very good at flying jets at ludicrously high speeds. He spends his days as a test pilot, and Rear Admiral Cole (Ed Harris) reminds him that in an age of drones and robotics, his piloting days are numbered. A different movie would show Maverick drummed out of the Navy and beginning a new life as a vacuum cleaner salesman/Instagram influencer/large animal veterinarian, but this is not that movie.

Conveniently, Maverick is given a new assignment. Military intelligence has learned of an enemy*** installation that needs to be bombed off the face of the Earth sooner rather than later. Doing so will require an insanely difficult approach, an assault requiring pinpoint accuracy, and an escape that’s nearly impossible. The Navy must be desperate and Vice Admiral Beau “Cyclone” Simpson (Jon Hamm) reluctantly orders Maverick to train a team of Top Gun recruits. They’re the best of the best, and a few of them are:

Complicating matters is the fact that Rooster is the all-grown-up son of Goose, Maverick’s former wingman who had an unfortunate encounter with a canopy. Somewhat illogically, Rooster blames Maverick for his dad’s death, among other things. Maverick will have to whip these kids into shape, deal with a relationship with feisty bar owner Penny (Jennifer Connolly), and reckon with his place in a changing world. 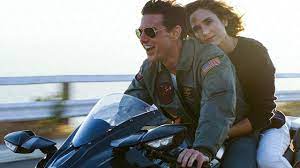 Fan service is an awfully hard thing to pull off properly. Do too much and you have Star Wars: The Force Awakens. Do too little and you have Star Wars: The Last Jedi. It’s like cooking with spices; you need to be very careful with the amount you use. In every way that matters, Top Gun: Maverick is a better film than its predecessor. It knows that the trick is to thread moments of nostalgia through the main storyline, reminding viewers what they loved about the original while (we hope?) attempting something new.

Oh, it ain’t perfect. We’ve got a fair bit of fan service, such as a gratuitous scene of beachfront sports, a pointless opening scene set to “Danger Zone,” and numerous moments of Cruise riding his motorcycle. But despite the fanwankery, director Joseph Kosinski crafts an engaging blockbuster featuring jaw-dropping flying sequences. When his career began, I thought he was all about style over substance. Foolish critic! In 2017, his underrated film Only the Brave featured filmmaking that was both slick and genuinely emotional. He’s evolved and brought his matured skillset within an iconic world of jet jockeys. It’s true that the action here is shot quickly enough to boost the energy and cleanly enough that, in a 360-degree environment, we always know who is where and why it matters. Yet Kosinski takes time to sit with the characters and show us moments of growth and camaraderie that, while a touch cheesy at times, provide emotional weight.

The screenplay by Ehren Kruger, Christopher McQuarrie, and Eric Warren Singer is a little less soap opera-y than the original, but only a little. Characterization is broad without being stupid, and we’ve got a much older Maverick who still delights in pissing off his superiors. Having said that, I was genuinely impressed with how the screenplay handled the training and mission execution. It does an outstanding job of leading us through the various steps in such a way that, by the time the mission is underway, we understand exactly what they need to do. With a screenplay structured that well, it means that when things really go to hell in the third act, we get what’s at stake and why.

They don’t make too many movie star vehicles like this anymore and make no mistake, that’s exactly what this is. Tom Cruise’s career launched into the stratosphere playing a cocky young guy in Top Gun. Decades of stardom have allowed Cruise to become a smarter and more skilled actor. Here, he’s still a guy with a healthy ego. It’s been tempered by loss, mistakes, and the passage of time. Maverick knows that the days of pilots like him are coming to an end, and he’s looking for one more shot at being the best. I know, that’s all kinda hoary, and it’s a testament to Cruise that he can sell something old like that and make it feel fresh. 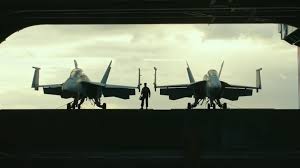 The supporting cast exists to…well, support Tom Cruise while earning their own individual moments. Everyone is playing a type, such as Jon Hamm as the cranky commanding officer, Miles Teller as the skilled rookie figuring out his place in the world, and Glen Powell as the egotistical jerk who’s maybe not such a bad guy. But when you have strong actors like this putting their own spin on recognizable types, it makes things fun. It was nice seeing Jennifer Connolly as a love interest who has a bit more of a personality and agency than Kelly McGillis did in the previous film.**** Val Kilmer’s got one scene, and despite his health challenges of late, he does a hell of a lot without doing much.

I can’t imagine watching Top Gun again. It’s one of those films that encapsulates a moment in time, and it’s a moment that never clicked with me. Its sequel is another story entirely. If you’re comfortable seeing a movie theatrically, find the theater closest to you with the biggest screen, crispest sound, and prepare to have your face melted off. Top Gun: Maverick is a triumph.

* I recently inflicted the OG Top Gun upon my family.* My wife, being the more levelheaded of the two of us, recognized that a) it didn’t age well and b) it was nothing more than harmless, Reagan-era piffle. I still didn’t like it, but I appreciated aspects of Tony Scott’s direction, some of the performances, and Cruise really does carry the whole damn thing on his back. My kid was…ah…not a fan. As the credits rolled, he looked at me with wide eyes and said, “People in the 80s had no taste!”

*** One of the charming callbacks to the first film is that Maverick and his team are doing battle against an unnamed aggressor. Like the first film, it’s almost certainly Russia, but if it makes you feel better to imagine Maverick bombing the hell out of Canada or New Zealand, you go right ahead.

**** You might be wondering what’s become of Kelly McGillis’ character. I’m sorry to tell you that the film is less curious about her than you are.

Tim Brennan
Tim has been alarmingly enthusiastic about movies ever since childhood. He grew up in Boulder and, foolishly, left Colorado to study Communications in Washington State. Making matters worse, he moved to Connecticut after meeting his too-good-for-him wife. Drawn by the Rockies and a mild climate, he triumphantly returned and settled down back in Boulder County. He's written numerous screenplays, loves hiking, and embarrassed himself in front of Samuel L. Jackson. True story.
Tagged: