“If it weren’t for my horse, I wouldn’t have spent that year in college” – Lewis Black

This brilliant non-sequitur line from comedian Lewis Black ran through my head more than once during the duration of “Best F(r)iends,” the new collaboration from “The Room” co-stars Tommy Wiseau and Greg Sestero. Where Mr. Black’s non-sequitur was the result of a brilliantly orchestrated anecdote, one which contained a beginning, middle and an end, “Best F(r)iends” plays like one, unending, logic free gag that lasts nearly two hours.

Written by Sestero, “Best F(r)iends” stars Tommy Wiseau as the owner of a mortuary, maybe, or perhaps an independent morgue… if such a thing exists. As the owner of the morgue Wiseau’s Harvey invites Sestero’s homeless man, Jon, to come work for him… sort of. Harvey appears to be bereft of friendship though for me to say that’s why he opens up to Jon would be reading a lot into the character on my part as Wiseau gives Harvey little inner life.

After seeing a story in the Wall Street Journal about gold and silver prices, Jon gets the idea to steal a cache of gold and silver teeth that Harvey has collected from corpses over his many years as a mortician. Harvey has collected so much tooth scrap over the years that he has a small fortune. How will Harvey react to finding out his new friend stole from him? You will have to see “Best F(r)iends” to find out.

It’s strange to say but I am deeply concerned about spoilers for “Best F(r)iends,” more so than I am normally regarding a movie I am reviewing. And yet, I can’t honestly say what I would be spoiling. “Best F(r)iends is so ludicrously incomprehensibly incompetent that I don’t know that I could ‘spoil’ anything about it and yet I don’t want to chance it with too much description. I say ludicrously, incomprehensibly incompetent but that is not me saying that “Best F(r)iends is bad, not by a long shot. 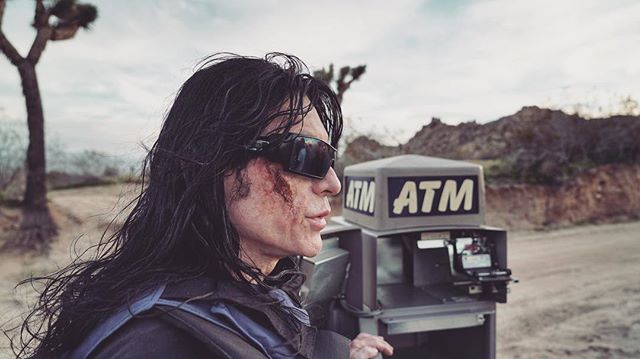 In fact, “Best F(r)iends” is one of the best movie going experiences of my career. I watched “Best F(r)iends” with a very small audience at a preview screening and we had an incredible time being completely baffled, appalled and wildly entertained by this ungodly mess of a movie. Somehow, despite the weight of expectations brought on by the cult success of “The Room,” arguably the greatest bad movie of all time, “Best F(r)iends” manages to recapture the unique and wonderful qualities that have made “The Room” an indelible part of popular sub-culture.

I genuinely have no clue as to whether director Justin MacGregor, working from the script by Greg Sestero, is the world’s greatest prank artist or a severely incompetent clone of his leading man, Tommy Wiseau. “Best F(r)iends” exists in this incredible uncanny valley between art and disaster and Mr. MacGregor rides the line between loving send-up and honest badness brilliantly.

A scene early on in “Best F(r)iends” has Greg and Tommy playing basketball outside the mortuary and the echoes of “The Room” are inescapable, enough so that you allow yourself to think the movie is self-aware parody. Then things take another crazy turn. MacGregor keeps employing unnecessary and off-putting camera tricks, something an amateur might try if they were trying to use a film camera for the first time and was wondering what each of the buttons were for.

“Best F(r)iends” has no scene to scene continuity. Scenes happen, normal dialogue is pitched with bizarre non-sequiturs interrupting the flow and then the next scene begins as if what we’ve seen had been completely forgotten. “The Room” played in a similar fashion and again the movie opens the door to the idea of self-awareness and then it turns again into some seemingly improvised nonsense.
All of this reads as a negative review, but I don’t mean for it to be negative. I legitimately LOVE “Best F(r)iends.” The incomprehensible aspects of the movie are the best parts. The WTF moments come from the very beginning and never let up. Dead clowns, underground stolen teeth rings, basketball, rubber masks for the living and the dead, scars that appear, fade, and appear again, are sprinkled throughout this gloriously, hilariously nonsensical movie.

In fact, the biggest part of the appeal of “Best F(r)iends” is the feeling of inclusion, of being in on a joke that only a few people understand. When “Best F(r)iends” ended, my small preview audience could not stop quoting the movie together. It was ours; the jokes belonged to each of us and only to us. We wanted nothing more than to share that joke with other in the know fans of Tommy Wiseau.

Regardless of the quality of Tommy Wiseau and Greg Sestero’s art, they are bringing people together. The bizarre anti-quality of “Best F(r)iends” appeals to this wonderful niche of likeminded people who can’t help but point and laugh but also find genuine pathos and joy in the effort made toward something so failing. “Best F(r)iends” is a rollercoaster of emotions ranging from confusion to adoration before settling into a spent bewilderment by the time it reaches an ending.

“Best F(r)iends” part 1 debuts Friday, March 30th and is playing in theaters nationwide for one night only. Part 2 is coming and June and I want to buy my ticket right now! In fact, I want to watch both films back to back and perhaps watch them again just to see if I can finally determine whether they are an elaborate, arty prank, or a genuine failed attempt at making a real movie.

Sean Patrick
Sean Patrick has been a professional Film Critic for over 17 years and a voting member of the Broadcast Film Critics Association since 2010 and Broadcast Television Journalists Association since 2015. Sean's reviews are heard on stations across Iowa and Illinois and his podcast Everyone's a Critic Movie Review Podcast has been going strong since 2014. Follow Sean on Twitter @CriticSean. "The Dude Abides"
Tagged: Best FriendsGreg SesteroSean PatrickThe RoomTommy Wiseau