‘A Quiet Place’ Is Terrifically Frightening

A Quiet Place stars John Krasinski and Emily Blunt as husband and wife and parents of three kids in a post-apocalyptic Midwestern America. We meet the family 89 days into this seeming apocalypse as they are gathering supplies in the dusty remains of a pharmacy. One of the kids is sick but the bigger issue is the youngest son who has set his eyes upon a battery powered toy rocket.

Why is the toy rocket a big deal? In this apocalypse, sound is your greatest enemy. The slightest hint of noise can bring the arrival of nasty, assumedly alien, beasts that strike quickly and kill mercilessly. When the boy flips the switch on his new toy, his parents were unaware he’d taken it, the tension is off the charts and A Quiet Place gets off to a stunning start that becomes a relentless, tension soaked 90 minutes. 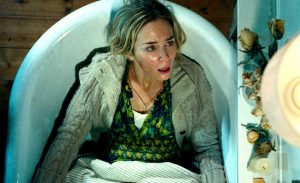 Emily Blunt in A QUIET PLACE, from Paramount Pictures.

John Krasinski directed A Quiet Place from a script initially penned by Bryan Woods and Scott Beck though Krasinski is also credited on the script. The premise is clever and Krasinski as director makes smart choices in how he capitalizes on the premise to create incredible tension. The toy rocket is just the first of several ways the movie capitalizes on the central notion of not making a sound.

The other major set-piece comes with the reveal that Blunt’s character, none of the characters are named until the closing credits, is pregnant. The logistics of attempting to give birth under the circumstances of this plot is clever if a tad unrealistic. We are forced to simply accept that these otherwise careful characters had very quiet sex and took the risk of pregnancy despite previous experience that told them how nearly impossible a silent birth would be.

One of the audience members at my screening of A Quiet Place was rather apoplectic at the notion of silent sex, though I do believe there is an attempt to explain it. That however requires reading far too much into what is an otherwise straight forward character study that also happens to be a horror movie. Let’s just say that a sound proofed room may or may not have been designed and leave it at that.

I have a number of quibbles with A Quiet Place, little loose strings I could tug on for a while but those are very much secondary to the excitement created by Krasinski’s smart direction. I will say that the clichéd exchange when a husband tells his pregnant wife she’s beautiful and she responds that she’s ‘fat’ and he makes a wise-crack about how he didn’t say that, is not refreshed simply by being said in ASL. If we could retire this conversation in movies I would be very happy.

Like I was saying however, my problems with A Quiet Place are relatively minor compared to how smart the movie is elsewhere. The monsters are scary, the action set-pieces are well staged and the tension, especially during the birth scene is off the charts fantastic. Krasinski’s deft camera choices play up the tension exceptionally well and the sound design smartly underlines the tension, even when it’s just a silly jump scare.

Is A Quiet Place a revolutionary new wave in horror? No, the hype in fact is probably doing a great disservice to the movie. A Quiet Place is very good but considering it as anything more than a terrifically thrilling genre piece is only going to cause future audiences to feel a tad disappointed. A Quiet Place doesn’t rethink the genre, it’s not a landmark event and if you go in expecting something iconic you may come away thinking you missed something.

Sean Patrick
Sean Patrick has been a professional Film Critic for over 17 years and a voting member of the Broadcast Film Critics Association since 2010 and Broadcast Television Journalists Association since 2015. Sean's reviews are heard on stations across Iowa and Illinois and his podcast Everyone's a Critic Movie Review Podcast has been going strong since 2014. Follow Sean on Twitter @CriticSean. "The Dude Abides"
Tagged: A Quiet PlaceBluebox LimitedBryan WoodsEmily Bluntjohn krasinskimichael bayScott Beck