It’s A Crisis For DC

In the last two weeks DC Comics has released two comics that have garnered a lot of attention. Just to be safe let’s establish both spoiler and mature content warnings. 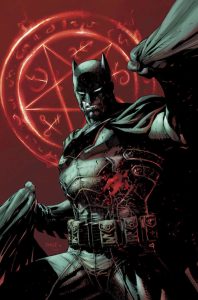 Two weeks ago was the release of Batman: Damned #1. Which included the first appearance of Batman’s penis, affectionately dubbed The Batawang (not in the comic itself, obviously).  This sparked some controversy, which should have been expected, but is so tiresome. Some retailers got angry that a book, heralded as DC’s first comic in their Black Label line of mature readers comics, but unlike Vertigo these comics would feature the DC comic’s character the general public would know. Like Batman (https://www.bleedingcool.com/2018/09/20/comic-retailer-dan-didio-batman-damned/). Retailers were emailed a digital preview copy, sans dialog, months ago to entice retailers to order the book. Yet these retailers complain they weren’t given enough advanced notice and DC should have polybagged every copy with notices that these weren’t to be sold to children. Isn’t it amazing that it’s DC’s fault that these Mrs. Lovejoys couldn’t be bothered with opening an email or even the book itself before they put it on sale so that little Timmy can’t see a mostly obscured by shadow penis? Nope, all DC’s fault. What bothers me more then anything is after people started complaining DC said they would censor all future printings of Damned #1 (https://www.bleedingcool.com/2018/09/20/batpenis-no-more-future-printings-of-batman-damned-will-be-censored/), but apparently that wasn’t enough because a week later they said they’d never reprint Damned #1 again (https://www.bleedingcool.com/2018/09/27/dc-comics-reprint-batman-damned-1-2-late/). I’m hoping that means that it will at least get collected after the other two issues are released, but that statement concerns me. So, if this has convinced you that you have to know what The Batawang looks like you’re going to have to spend a pretty penny. I’ve heard it averages around $50 on eBay. Or Google it like I did.

Last week DC released Heroes in Crisis #1, which looked like a unique approach to a superhero crossover punch up. To borrow a line from it’s solicit: “How does a superhero handle PTSD?” It’s being written by Tom King and draw by Clay Mann, two creators I’m a fan of. The solicit also teased that the first issue would be killing off a number of characters, which they didn’t skimp on. It’s these character deaths that set off a number of DC fans either declaring that they either wouldn’t read Heroes in Crisis or stop reading DC altogether. Which I doubt will happen, this being a common refrain among fanboys. I can kind of understand it though. Tom King first laid the ground work for this Crisis in his Batman run when Booster Gold was trying to get a wedding gift for Batman. Booster decided to save Batman’s parents. This didn’t go well and he had to undo saving the Waynes. Which is why Booster is at the facility were someone starts murdering superheros and for some reason Harley Quinn is there. While I don’t have a strong connection to many DC characters I am annoyed with this change to Booster Gold. He’s supposed to be a fun character and this sudden swing into dark territory doesn’t sit well with me.

It’s amazing to me that two of DC’s biggest releases this year almost instantly came back to bite them in the ass. Both of which were easily avoidable since The Batawang wasn’t critical to the story and could have been removed. I do applaud them for going there, but then I have to criticize them for chickening out. The new Crisis was really what should be expected from a DC Crisis story: bad things happen, a villain was probably behind it all and a Flash dies. Nothing new there, so I don’t know why fans are upset, but they’re fanboys and they’re always upset. I mean it’s the first issue and one of the main characters is know for time travel. I wonder how this is going to end.

So I hope DC keeps up with this experimentation and they don’t panic anymore then they already have about this. If DC wants to keep me as a reader they need to get stranger, not play it safe. Bringing back Hellblazer would be a good start.