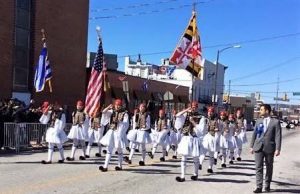 It’s time to celebrate the 197th anniversary of Greek Independence! Are you ready?

The 2018 Maryland Greek Independence Day Parade will take place this Sunday Mar 25 at 2 p.m. in Baltimore’s Greektown on Eastern Avenue and Ponca Street.

This year’s celebration marks the 197th year since Greece’s declaration of independence from Ottoman Turkish rule. The parade features dance groups in ethnic costumes, children groups and Orthodox Clergy from the Baltimore-Washington area. These groups come from as far away as Ocean City, Hagerstown, and Frederick, Maryland, Washington, D.C., Falls Church and Fredericksburg, Virginia, as well as Lancaster and York, Pennsylvania. Delicious ethnic food will also be available!

For updates and more information, visit http://www.greekparade.com/main.htm or the Facebook event page at https://www.facebook.com/events/239371099929926/.

Come out and celebrate in Greektown this weekend! Opa!

Tess Abney
Tess Abney is a freelance writer who was born and raised in the Quad Cities. She spends most of her time attempting to successfully raise three boys. In her free time, writing is her passion. Whether it is sharing local events and businesses with readers or sharing her thoughts on life, she finds comfort in the way words can bring people together.
Tagged: BaltimoreGreektownMaryland Greek Independence Day Parade