‘Solo’ Doesn’t Drive Like A Ford, But It’s A Fun Ride

It’s always hard to replace a legend, even more so to replace an icon, and that’s the weakness of “Solo: A Star Wars Story,” a good and entertaining ride of a “Star Wars” flick, but one that still pales a bit for lack of a substantial spark from its titular star.

Alden Ehrenreich has the difficult role of stepping in for Harrison Ford, whose rough charisma was one of the highlights of the original “Star Wars” trilogy and its subsequent sequels. Ford is an inimitable actor, an icon of action-adventure, so it’s a nigh impossible task to fill his shoes. Ehrenreich is… ok. He’s got kind of a Dennis Quaid smile and charm to him, and he’s not bad, nowhere near the awfulness of a Hayden Christensen as Anakin, but he’s just not quite Ford tough. Some might say that’s because he’s playing the character as a younger and less jaded man, but that’s a cop out. He’s just lacking that gruff charm and smart ass charisma that made Ford so great as Han Solo.

That said, he’s still solid in the part, and if I’d never seen a “Star Wars” film featuring Ford in my life, I’d 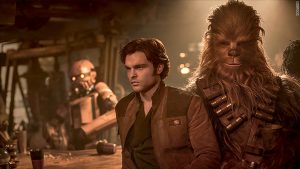 be perfectly content with his portrayal. That said, I have seen all the “Star Wars” films, and his portrayal does pale in comparison, especially when you place it alongside Donald Glover’s brilliant performance as Lando, striking the absolute perfect notes echoing Billy Dee Williams’ smarmy charm. Glover is one of many highlights of the film, along with a solid script, thrilling action sequences, good direction from Ron Howard and overall stellar casting.

Emilia Clarke, Woody Harrelson and Thandie Newton comprise a pretty strong supporting cast, and the luring in of award-winning actors to fill supporting roles pays off with a really solid feel for the surrounding characters and a good bedrock for the story and the leads.

And then of course there’s Chewbacca, who does an excellent job playing Chewbacca. I smell an Oscar. Or maybe that’s just wet Wookiee?

“Solo,” for those completely out of the loop, is essentially an origin story of the titular character, going back to before even the first three prequels. It’s a really fun script for “Star Wars” fans, throwing us ample cookies and cameos of well-known and loved characters and scenarios, including the infamous Kessel run and an excellent surprise villain showing up near the end. It’s a great story and should satisfy huge fans as well as casual fans of the canon.

It’s kid-friendly but not pandering and stupid, featuring some nuance and twists to the script, and it isn’t afraid to hint at some darker material that will go over the heads of most children but adds depth to the story.

In all, “Solo” is a lot of fun and a good summer film, featuring more character development and better acting and direction than your average big action flick, while still delivering stellar special effects and thrilling sequences. Could they have found a more Ford-like actor than Ehrenreich? Who knows? Like I said, he’s not bad, and I’m sure my bias as a big Harrison Ford fan is showing. Aside from that, which many viewers probably won’t find a flaw or even care about anywhere near as much as me, I can easily recommend “Solo.”

Sean Leary is an author, director, artist, musician, producer and entrepreneur who has been writing professionally since debuting at age 11 in the pages of the Comics Buyers Guide. An honors graduate of the University of Southern California masters program, he has written over 50 books including the best-sellers The Arimathean, Every Number is Lucky to Someone and We Are All Characters.
Tagged: alden ehrenreichBilly Dee Williamsdonald gloverEmilia ClarkeHan Soloharrison fordron howardSolostar warsThandie Newtonwoody harrelson