The highly anticipated Shiny and Oh So Bright Tour is in full swing and heading straight for Baltimore!

The Smashing Pumpkins, along with Metric, are bringing their Oh So Bright Tour to Royal Farms Arena (201 W Baltimore St. Baltimore) this Friday Jul 27 at 7 p.m. 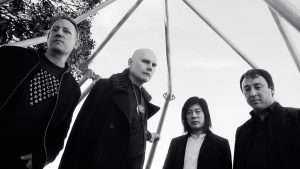 GRAMMY® Award-winning, acclaimed alternative rock pioneers The Smashing Pumpkins have announced the Shiny And Oh So Bright Tour, their first tour in nearly 20 years to feature founding members Billy Corgan, Jimmy Chamberlin, and James Iha. Produced by Live Nation, the 36-city tour will kick off in Glendale, AZ on July 12, 2018 and visit North American arenas throughout the summer.

The monumental Shiny And Oh So Bright Tour, which coincides with the 30th anniversary of the band’s formation, will highlight music from the group’s inception through 2000, and will exclusively feature material from their groundbreaking debut Gish through Siamese Dream, Mellon Collie and the Infinite Sadness, Adore, and Machina. Longtime Smashing Pumpkins guitarist Jeff Schroeder will also take part, as the band moves to a three guitar lineup to better emulate the signature tones and textures of their albums. (Royal Farms Arena, http://www.royalfarmsarena.com/events/detail/smashing-pumpkins)

Ticket prices vary and can be purchased online at https://www1.ticketmaster.com/the-smashing-pumpkins-shiny-and-oh-baltimore-maryland-07-27-2018/event/1500544D92D229B5.

Don’t miss this nostalgic journey with The Smashing Pumpkins!

Tess Abney
Tess Abney is a freelance writer who was born and raised in the Quad Cities. She spends most of her time attempting to successfully raise three boys. In her free time, writing is her passion. Whether it is sharing local events and businesses with readers or sharing her thoughts on life, she finds comfort in the way words can bring people together.
Tagged: BaltimoreMetricOh So Bright TourRoyal Farms ArenaThe Smashing Pumpkins