Check Out Khalid At MECU Pavilion

Khalid is finishing up The Roxy Tour, but not before a stop in Baltimore!

The Roxy Tour gets its name from Khalid’s newly adopted Pitbull mix, Roxy, whom he rescued from a Los Angeles animal shelter. In honor of Roxy, $1 from every ticket sold will be given to local animal 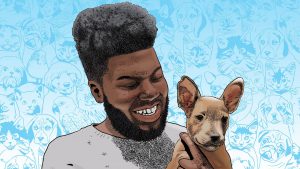 shelters on each tour stop.

Ticket prices vary and can be purchased online at https://www.ticketmaster.com/MECU-Pavilion-formerly-Pier-Six-Pavilion-tickets-Baltimore/venue/172104.

Tess Abney
Tess Abney is a freelance writer who was born and raised in the Quad Cities. She spends most of her time attempting to successfully raise three boys. In her free time, writing is her passion. Whether it is sharing local events and businesses with readers or sharing her thoughts on life, she finds comfort in the way words can bring people together.
Tagged: BaltimoreKhalidMECU PavilionPier Six PavilionThe Roxy Tour