Baltimore Soundstage is the place to be for live music, this Sunday!

Reel Big Fish, along with BALLYHOO! and We Are The Union, bring The Tickle My Tiki TOURch to Baltimore Soundstage (124 Market Pl. Baltimore) this Sunday Nov 25. Doors open at 7 p.m. and the show begins at 8 p.m. 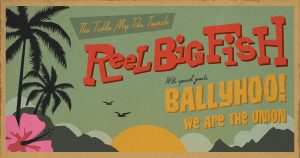 Reel Big Fish were one of the legions of Southern California ska-punk bands to edge into the mainstream following the mid-’90s success of No Doubt and Sublime. Like most of their peers, they were distinguished by their hyperkinetic stage shows, juvenile humor, ironic covers of new wave pop songs, and metallic shards of ska. The group cultivated an underground following that broke into the mainstream in summer 1997, when the single “Sell Out” became a modern rock radio and MTV favorite. Reel Big Fish’s popularity gradually waned in the subsequent years, following the decline of ska-punk as a marketable genre. Nevertheless, the band restructured its lineup and continued issuing new material to a smaller (yet considerably rabid) fan base.

Tickets are just $22.50 in advance and $26.50 on the day of the show. Purchase your tickets today at https://www.baltimoresoundstage.com/events/reel-big-fish-the-tickle-my-tikitourch/.

Tess Abney
Tess Abney is a freelance writer who was born and raised in the Quad Cities. She spends most of her time attempting to successfully raise three boys. In her free time, writing is her passion. Whether it is sharing local events and businesses with readers or sharing her thoughts on life, she finds comfort in the way words can bring people together.
Tagged: BALLYHOO!BaltimoreBaltimore SoundstageEventsReel Big FishThe Tickle My Tiki TOURchThings To DoWe Are The Union