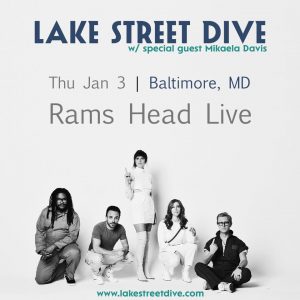 Lake Street Dive formed in 2004 while students at New England Conservatory and have been touring non-stop ever since, growing from basement venues like The Lizard Lounge in Boston, MA to selling out Radio City Music Hall in New York City. For this album, the quartet drafted touring keyboardist Akie Bermiss to join them in the studio. Adding another player to the process freed up the band members to explore a wider range of instrumental textures, construct more full-bodied arrangements, and build on their well-known background harmonies. “This album is based in the realities in our time,” Kearney reflects, “which have inevitably become part of everyone’s daily life. It’s something you think about and obsess over — and write songs about. Free Yourself Up is about empowering yourself, emboldening yourself, no matter what’s going wrong.”

Tickets are just $38 and can be purchased online at https://www.axs.com/events/365134/lake-street-dive-tickets?skin=ramsheadlive.

Tess Abney
Tess Abney is a freelance writer who was born and raised in the Quad Cities. She spends most of her time attempting to successfully raise three boys. In her free time, writing is her passion. Whether it is sharing local events and businesses with readers or sharing her thoughts on life, she finds comfort in the way words can bring people together.
Tagged: BaltimoreEventsLake Street DriveMikaela DavisRams Head LiveThings To Do