Hey Baltimore, are you ready for an experience like none other? 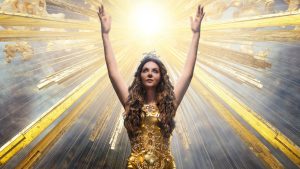 To enhance her world of enchantment, Sarah Brightman has partnered with Swarovski on her world tour. Her elaborate costumes and dazzling tiaras will be composed of Swarovski crystals. Fans will also have the opportunity to take home a sparkling memento through a variety of custom tour merchandise from Sarah’s signature product line designed and embellished with crystals from Swarovski. More information to be revealed in the coming months on this exciting partnership.

“I’m so excited to share this album with everyone. HYMN is excitingly eclectic, encompassing many different styles, and I’m looking forward to performing the new songs on my world tour. Every project I’ve done has come from an emotional place, and I wanted to make something that sounded very beautiful and uplifting.  To me, ‘hymn,’ suggests joy — a feeling of hope and light, something that is familiar and secure, and I hope that sentiment resonates through the music,” said Sarah Brightman.

Brightman returned to the recording studio in 2016 to begin working on HYMN with long time producer and collaborator Frank Peterson who notably helmed production on eight seminal recordings by the artist, including Dive [1993], Fly [1995], Timeless (Time To Say Goodbye) [1997], Eden [1998], La Luna [2000], Harem [2003], and Symphony and Winter Symphony [2008]. The spiritually themed HYMN is an inspirational collection of orchestrated, choir-based songs that Brightman says felt soothing to record at this moment in her life. The album was recorded over the past two years in Hamburg, Miami, London, Vancouver, Los Angeles, New York, and Budapest.

HYMN’s mystical, uplifting tone is set with its title track — a song by British prog-rock band Barclay James Harvest. The release also encompasses songs by such modern composers as Eric Whitacre (“Fly To Paradise”), Japanese superstar musician and songwriter Yoshiki (“Miracle”), and German DJ Paul Kalkbrenner (“Sky and Sand”). The album closes with a new rendition of Brightman’s signature smash duet with Andrea Bocelli, “Time To Say Goodbye,” singing lyrics that she wrote herself, and sung in English for the first time.

Tess Abney
Tess Abney is a freelance writer who was born and raised in the Quad Cities. She spends most of her time attempting to successfully raise three boys. In her free time, writing is her passion. Whether it is sharing local events and businesses with readers or sharing her thoughts on life, she finds comfort in the way words can bring people together.
Tagged: BaltimoreEventsFrance-Merrick Performing Arts CenterHippodrome TheatreHymnNarcis IanauSarah BrightmanThings To DoVincent Niclo