Feeling the need for something a bit heavier in terms of live music this holiday season? 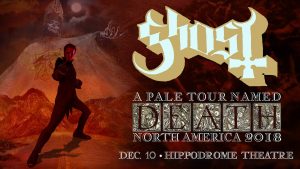 Swedish heavy metal masters Ghost and predominant frontman Tobias Forge are touring on the success of their recently released album Prequelle which debuted at number three on the Billboard Top 200 albums chart. The record is the bands fourth studio album and was the follow up to 2015s Meliora. Additionally, the band has reached other achievements such as Best Metal Performance at the 2016 Grammys for “Cirice” as well as Breakthrough Band at the 2012 Metal Hammer Golden Gods Awards. Their theatrical live performances have been gaining the band new fans all across the world.

Fans are encouraged to dress up, but please note no weapons or prohibited items are permitted. Please allow enough time for enhanced security. See here for prohibited items list: https://baltimore.broadway.com/venues/theaters/hippodrome-theatre/.

Tess Abney
Tess Abney is a freelance writer who was born and raised in the Quad Cities. She spends most of her time attempting to successfully raise three boys. In her free time, writing is her passion. Whether it is sharing local events and businesses with readers or sharing her thoughts on life, she finds comfort in the way words can bring people together.
Tagged: A Pale Tour Named DeathBaltimoreeventFrance-Merrick Performing Arts CenterGhostheavy metalHippodromeLive MusicThings To Do