Are you ready for the only official Brewers Association of Maryland event in Baltimore?

This festival will feature the widest selection of MD craft breweries in the state and a homebrew competition, sponsored by Nepenthe Homebrew, where attendees have the opportunity to judge their favorites! Boasting all of the best parts of Baltimore, the event includes live Baltimore bands, local food trucks, corn hole & supports Strong City Baltimore! 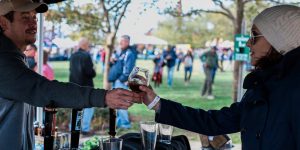 General admission tickets are just $40 ($45 at the gate) and a VIP Pass is $55 ($60 at the gate). To purchase your tickets today, visit http://www.baltimorecraftbeerfestival.com/.

Tess Abney
Tess Abney is a freelance writer who was born and raised in the Quad Cities. She spends most of her time attempting to successfully raise three boys. In her free time, writing is her passion. Whether it is sharing local events and businesses with readers or sharing her thoughts on life, she finds comfort in the way words can bring people together.
Tagged: BaltimoreBrewers Association of MarylandCanton Waterfront Parkcraft beerCraft Beer FestivalEventsThings To Do