Home » Articles » Music » A Perfect Circle Rocking Out in Baltimore

A Perfect Circle Rocking Out in Baltimore

A Perfect Circle is heading to the UMBC Event Center (1000 Hilltop Circle Baltimore) this Wednesday Nov 7 at 7:30 p.m. 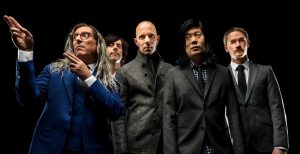 American rock supergroup A Perfect Circle was formed in the late ’90s by Tool vocalist Maynard James Keenan and former Tool guitar tech Billy Howerdel. On their debut, Mer de Noms, A Perfect Circle were seen as an extension of the alt-metal-fused-with-art-rock style popularized by Tool in the early to mid-’90s. Despite comparisons, however, A Perfect Circle quickly developed into its own entity, focusing on lighter and more melodic sounds that were combined with a theatrical, ambient quality incorporating occasional strings and unconventional instrumentation on later albums like Thirteenth Step and Eat the Elephant. Over the decades, members of Nine Inch Nails, Marilyn Manson, Smashing Pumpkins, and Queens of the Stone Age have played a role in the band’s revolving lineup under the core songwriting duo of Keenan and Howerdel.

Tess Abney
Tess Abney is a freelance writer who was born and raised in the Quad Cities. She spends most of her time attempting to successfully raise three boys. In her free time, writing is her passion. Whether it is sharing local events and businesses with readers or sharing her thoughts on life, she finds comfort in the way words can bring people together.
Tagged: A Perfect CircleBaltimoreEventsLive MusicMaynardMaynard James KennanThings To DoToolUMBC Event Center