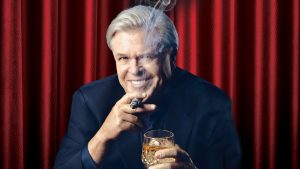 This hilarious comedian is a classic storyteller; relaying tales from his real life ranging from growing up in a small town in Texas, to sharing stories of his daily life, to becoming one of the most successful comedians in America.

Ron first rose to fame as the cigar-smoking, scotch-drinking funnyman from the Blue Collar Comedy Tour phenomenon, but since 2004 has since established himself as a star in his own right. Over the past 15 years, Ron has been one of the top grossing stand-up comedians on tour in the country.

Tess Abney
Tess Abney is a freelance writer who was born and raised in the Quad Cities. She spends most of her time attempting to successfully raise three boys. In her free time, writing is her passion. Whether it is sharing local events and businesses with readers or sharing her thoughts on life, she finds comfort in the way words can bring people together.
Tagged: BaltimoreBlue Collar ComedyComedyEventsJoseph Meyerhoff Symphony HallRon WhiteTater SaladThings To Do