Do you need more laughter in your life? Then make plans to head to the Royal Farms Arena this weekend!

Mike Epps is a stand-up comedian, actor, film producer, writer, and rapper. He is best known for playing Day-Day Jones in Next Friday and its sequel, Friday After Next and also appearing in The Hangover as “Black Doug”. When Epps isn’t filming, he is touring the country and performing his comedy act. The Mike Epps on the Edge Tour sold-out theaters and arenas across the country. 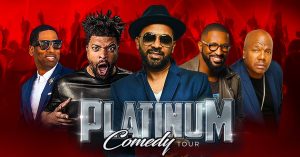 Earthquake shares his talent as an actor, voice artist, talk show host and comedian. In 2005, he performed a half-hour HBO special as part of the series One Night Stand. He also had a role in Kevin Smith’s film Clerks II, and a supporting role in the film The Longshots. He had a recurring role as Chris’ Uncle Mike, on Everybody Hates Chris.

Born and raised on the south side of Chicago, DeRay Davis is currently the Host of Ice Cube’s Hip Hop Squares (VH1). This while also playing “Peaches” in the wildly successful dramatic television series Snowfall (FX). He achieved his comedy career breakthrough at the Laffapalooza Festival in Atlanta. Davis continues to sell out venues worldwide with his authentic brand of comedy due in part to his Critically Acclaimed Netflix Comedy Special, DeRay Davis: How to Act Black.

Rickey Smiley is a stand-up comedian, television host, actor, and radio personality, known for his prank phone calls. Smiley has starred in sitcom The Rickey Smiley Show which aired on TV One. He is also a featured columnist on the Fox-produced tabloid nationally-syndicated show Dish Nation among many other programs.

Tony Rock, the younger brother of Chris Rock, is an actor and stand-up comedian. He is currently a co-star on CBS’ comedy Living Biblically. Tony hosted Comedy Central’s successful BattleBots and Oxygen’s Can You Tell? It is said that Tony has a natural knack for entertaining and came into this world laughing.

Tickets for this show are $128, $78, $62 and $55 and can be purchased online at http://www.royalfarmsarena.com/events/detail/platinum-comedy-tour.

Tess Abney
Tess Abney is a freelance writer who was born and raised in the Quad Cities. She spends most of her time attempting to successfully raise three boys. In her free time, writing is her passion. Whether it is sharing local events and businesses with readers or sharing her thoughts on life, she finds comfort in the way words can bring people together.
Tagged: BaltimoreDeray DavisEarthquakeMike EppsPlatinum Comedy TourRickey SmileyRoyal Farms ArenaTony Rock