Get LIT AF this NYE at Royal Farms Arena!

The LIT AF Tour will be making a stop at Royal Farms Arena (201 W Baltimore St. Baltimore) this Monday Dec 31 at 9 p.m. 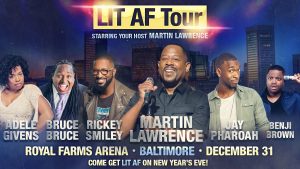 Back by popular demand, comedian, actor, director and producer Martin Lawrence has added 19 more dates to the LIT AF Tour, including New Year’s Eve in Baltimore at Royal Farms Arena! Lawrence stars as the high-powered host of 2018’s hottest comedy event, presenting a fire lineup of comedians including Rickey Smiley, Jay Pharoah, Bruce Bruce, Adele Givens, and Benji Brown. Coming off the 20th anniversary of Def Comedy Jam, where he is known for his legendary hosting, Lawrence has made a triumphant return to the stand-up stage wowing audiences with his signature style of hilarious stories, social commentary and more.

Ticket prices vary and can be purchased online at https://www1.ticketmaster.com/lit-af-tour-hosted-by-martin-baltimore-maryland-12-31-2018/event/150054EAD6C273A4.

Tess Abney
Tess Abney is a freelance writer who was born and raised in the Quad Cities. She spends most of her time attempting to successfully raise three boys. In her free time, writing is her passion. Whether it is sharing local events and businesses with readers or sharing her thoughts on life, she finds comfort in the way words can bring people together.
Tagged: Adele GivensBaltimoreBenji BrownBruce BruceComedyEventsJay PharoahLIT AFLIT AF TourMartin LawrenceRickey SmileyRoyal Farms ArenaThings To Do